The American cockroaches are one of the largest cockroaches that invade a house. Adults average about 4 cm with some growing as long as 5 cm. Adult American cockroaches are mahogany or reddish brown in color. A yellow band outlines the area behind their heads. Immature nymphs have a grayish brown color. As they start maturing their color turns reddish brown. Both the females and males and can fly. They develop their wings when they have reached adulthood.

Seeing insects with the above mentioned appearance is proof of their existence. American cockroaches run very fast and they normally scurry into dark areas. When they are startled, they may fly.

Droppings can be found in dark areas where they hide. Homeowners may find their droppings behind appliances, in pantries or in basements. The droppings of American cockroaches are small and they can easily be mistaken for mouse droppings. The cockroach droppings are blunt on the ends and have ridges on the sides.

Egg cases of American cockroaches are about 40 mm long. They are blackish brown, reddish or dark in color. The egg cases are normally found in kitchens, laundry rooms and basements. They may also be found behind appliances or under cabinets. Sheds and garages are also good places of storage for the cockroaches’ egg cases. 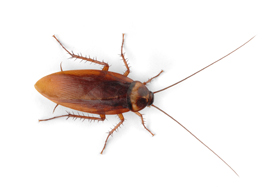 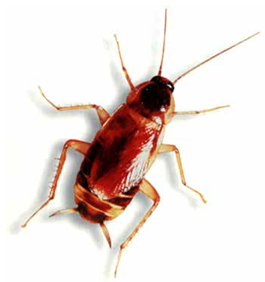